Do you suffer from heartburn? Do you typically rely on the over-the-counter medicine commonly known as Zantac to relieve this pain? Have you been diagnosed with cancer? If so, you may have a case due to the Zantac recall.

There have been some ripples in the scientific community over potentially unacceptable levels of a potential carcinogen in drugs like Zantac. On April 1st, 2020, The U.S. Food and Drug Administration issued a recall for various Zantac brand and generic heartburn products. If you or a loved one has taken Zantac, please read on.

Over the course of the last year, there has been concern centered on the drug ranitidine (known most commonly as Zantac) for the presence of N-Nitrosodimethylamine (NDMA).

What is ranitidine  or NDMA and why are they so important?

Ranitidine is a type of drug that is labelled as an H2 histamine blocker.  This drug is typically used to prevent or relieve heartburn,  and is made available in both over the counter and prescription strengths. It has also been used in the medical field to treat some stomach ulcers or lining problems.  NDMA is thought to be a probable human carcinogen.

Carcinogens are substances that can cause cancer in living tissue. So it is easy to see why the FDA would be concerned about reports of these carcinogens in such a commonly used household product.  However, it should be noted that while there is cause for concern, the studies that have led to these conclusions are based on tests done on animals, not humans. According to Harvard Health Publishing ¨Although classified as a probable carcinogen, NDMA may cause cancer only after exposure to high doses over a long period of time.¨

This first was brought to the FDAś attention when an independent laboratory test from Connecticut noted that they found the presence of NDMA under varying conditions. This report spurred the FDA to warn the public in September of 2019 that they may want to consider trying other brands of heartburn medication*, and prompted further testing. Walgreens, CVS, and other major drugstore chains started pulling the products from shelves in October 2019,  and a few major producers performed a voluntary recall.

Health officials in Canada and France quickly issued statements recalling these products from shelves while  further testing was ongoing. Not much more was heard about the drug for a few months in the USA, then an official recall was issued for Zantac and all products containing ranitidine on April 1st, 2020.  The potential risks involved with long term use of the drugs are not entirely known at this time, but there have been possible links to pancreatic and colon cancer.

If you have taken Zantac for heartburn, you may want to consider speaking with your doctor about taking alternative medicines*, or embarking upon lifestyle changes to prevent heartburn maladies.  Beyond changing your approach to handling heartburn, you should be aware that class action lawsuits have been filed in several states. If you think you might have a case linked to your use of ranitidine, you should contact Cowan & Hilgeman for a consultation today.

*According to the FDA,  ¨To date, the FDA’s testing has not found NDMA in famotidine (Pepcid), cimetidine (Tagamet), esomeprazole (Nexium), lansoprazole (Prevacid) or omeprazole (Prilosec).¨

What You Should Know About the Zantac Recall (Ranitidine) 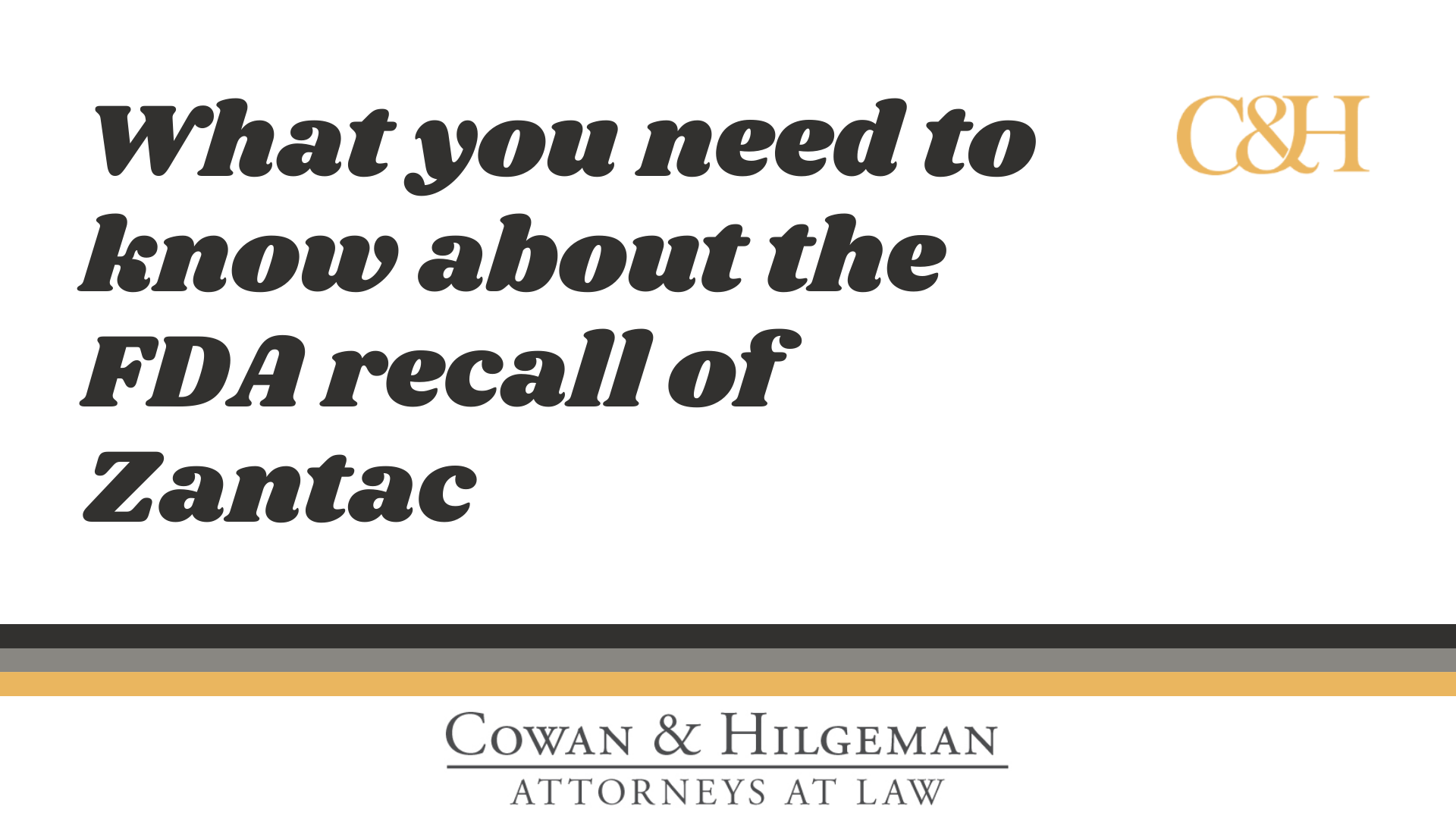 IMPORTANT RANITIDINE UPDATE: The United States Food and Drug Administration (FDA) issued a press release on April 1, 2020 requesting manufacturers to immediately withdraw all Zantac and generic Zantac OTC drugs from the market. The FDA has found that N-Nitrosodimethylamine (NDMA) in some ranitidine drugs “increases over time and when stored at higher than room temperatures and may result in consumer exposure to unacceptable levels…” The FDA, the World Health Organization (WHO), and the Environmental Protection Agency (EPA) classify NDMA as a cancer-causing substance, and has issued a Zantac recall, effective immediately.

Zantac has been on the market for over thirty years and millions of people have taken brand name product and its generic, ranitidine. For anyone currently taking these drugs, you should immediately contact your doctor to discuss your options.

Zantac is a medication that limits the production of stomach acid and belongs to a class of medications known as H2 blockers. It is sold as a generic under the name of its active ingredient, ranitidine. Zantac is sold over-the-counter to treat heartburn and acid indigestion, and prescribed for the treatment of duodenal and gastric ulcers, gastroesophageal reflux disease, and certain stomach and esophagus conditions.

NDMA is classified as a probable human carcinogen that can form as a byproduct of industrial processes or, as in Zantac, from exposure to high temperatures or storage over time. The chemical can be found in small quantities in drinking water but in levels that are considered generally harmless. The NDMA found in the recalled Zantac and ranitidine products is above levels considered safe by the FDA. NDMA had previously been found in the blood pressure medication Valsartan, which prompted a string of product recalls starting in July 2018.

NDMA exposure in Zantac and ranitidine has been linked to digestive system cancers such as:

Additionally, in babies born to mothers who took Zantac consistently throughout their pregnancies, NDMA has been linked to cancers, including brain cancers, in young children.

The FDA has issued an order to cease all distribution of Zantac because it cannot guarantee the safety of it. While the drug itself does not contain harmful levels of NDMA, the cancer-causing chemical can form over time during shipping, handling and storage – especially if it is stored at high temperatures such as in your car. The Zantac recall applies to all manufacturers and brands.

The Dangers of Driving While Under the Influence of Prescription Drugs

It is a well-known fact that driving under the influence of alcohol is illegal, but not everyone realizes the dangers of driving after taking drugs — including prescription and over-the-counter medications. Many legally obtained and commonly used OTC and prescription drugs can affect a user’s ability to drive safely.

Antidepressants, opioids, and other prescription drugs may cause impairment.

If you are taking a prescription drug, or get a prescription for a new medicine or a higher dose of a current drug, do not drive until you know what effect it has on your judgment, coordination, and reaction time. Additionally, certain medications may not impair you on their own, but if taken with a second medication or with alcohol, they may cause impairment. Know that warnings against “operating heavy machinery” include driving a vehicle.

Cold and allergy medicines, sleep aids, and other OTC medications can cause side effects, including drowsiness, nausea, and blurred vision — all of which can put everyone on the road at risk.

There’s more than one way to be under the influence.

It doesn’t matter what term you use: If a person is feeling a little high, buzzed, stoned, wasted, or drunk, he or she is impaired and should not get behind the wheel. Before leaving the pharmacy, understand the warnings about the drugs you are taking. If you are taking a prescription or over-the-counter medication that may impair your driving, you should not drive.

If you or a loved one has been injured by a person driving under the influence of prescription or over-the-counter medication, call the trusted Dayton Personal Injury Attorneys, Cowan & Hilgeman, to schedule your FREE consultation – (937) 222-2030.

"I obtained the services of Jack and they made sure that everything was taken care of to aleviate stressors, and made my tragedy much easier to cope with without the extra mental burden of my pending case. The staff is always friendly and helpful and you couldnt find a better team to defend you or your family."
Daniel U U